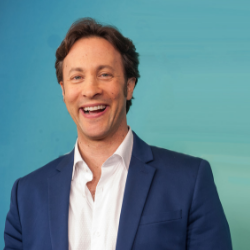 David EaglemanNeuroscientist, Inventor, Host of PBS’s The Brain and Author

To most ‘experts,’ creativity is anecdotal: a highly personal, largely mysterious process that either speaks to you or doesn’t. David Eagleman doesn’t see it that way. He starts with neuroscience—how the brain actually functions—and shows that innovation doesn’t have to be a private, enigmatic exercise. Knowing how the mind really works means that yes, we can understand human creativity—how it shapes and transforms companies, classrooms, and individual creators. His latest book, The Runaway Species: How Human Creativity Remakes the World is a stunning, full-color collaboration with composer Anthony Brandt on the foundations—and furthest reaches—of creativity. But this isn’t just a celebration of our unique minds: it’s a practical handbook, excerpted in Wired and Psychology Today, for building more creative companies and institutions. Essentially, it’s about learning how we think—and learning how we can think differently.
Often called the Carl Sagan of neuroscience, he’s the scientific advisor on HBO’s Westworld, a bestselling author, host of PBS’ Emmy-nominated series The Brain, and host of the new documentary The Creative Brain, now streaming on Netflix. A Guggenheim Fellow and winner of major awards—including the McGovern Award for Excellence in Biomedical Communication.
These accolades—both popular and academic—prove Eagleman’s rare ability to make advanced science relevant, immediate, and fun. His widely celebrated books include the New York Times bestseller Incognito: The Secret Lives of the Brain and The Brain: The Story of You. His short fiction collection SUM was named a Best Book of the Year by publications around the world, has been translated into 27 languages, and inspired U2 producer Brian Eno to write twelve new pieces of music, which he performed, with Eagleman, at the Sydney Opera House.

K01 – Welcome and Opening Keynote – Livewired: How we transform the world through human creativity