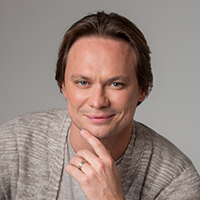 Born and raised in Miami, Guido Campello graduated from the industrial design program at Design and Architecture Senior High in 1999 and New York University Gallatin School of Individualized Study in 2003 with a degree in Urban Design & Planning. He commenced his design career in interior finishes and design at Pompei AD New York for retailers Anthropologie, Urban Outfitters, Free People and MTV. After moving to Japan in 2005 as part of the J.E.T.T. English teaching program he joined the Sales and Marketing team at a Japanese distribution company in Tokyo.

Upon returning to New York in 2007, he became VP of Sales, Branding & Innovation at Cosabella. In 2010 supported his wife, Dr. Sapna Palep’s launch of her private practice Spring Street Dermatology. In 2014 Guido Campello was named as Cosabella CEO and in 2015 he was inducted into The Council of Fashion Designers of America, Inc. (CFDA).

In 2017, Guido founded G.Campello his namesake brand and product development consultancy. In 2018, he supported the sale of Spring Street Dermatology to medical platform Belhealth. In January of 2019 he partnered to launch Embody Effortless, a luxury intimates bra fitting and lifestyle brand. In July 2019, he and his wife partnered to acquire Journelle, a New York based multibrand omni-channel lingerie retailer with 3 storefronts in New York and 1 in Chicago. Journelle and Embody Effortless labeled collections will launch globally in specialty and department store retailers Winter 2019.

What Retailers Have to Gain from Returns