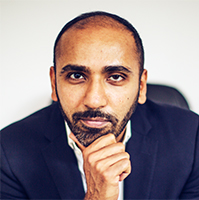 Moiz Ali is the founder and Chief Executive Officer of Native. Launched in 2015, Native is the fastest growing CPG company in the United States, and has over 3 million customers nationwide. The company was acquired by Procter & Gamble in November 2017, the first acquisition by P&G in nearly ten years. Prior to founding Native, Moiz was the founder and CEO of Caskers, a flash sales site for spirits. Moiz graduated from Harvard Law School in 2009.

Establish and Protect Your Brand Identity